Mishti Doi (sweet yoghurt) is one of the most famous Bengali sweets and is widely popular as a dessert. Simple to look but rich in taste, Mishti Doi is quite different from other sweets. Though easily available in packaged form these days, old-timers still like it in the traditional way — served in earthen pots that soak up all the loose water and leaves the rich and sweetness to devour. You usually get this only in shops specialising in Bengali sweets, but it is an extremely simple dish and can be easily made at home. Here goes the recipe. 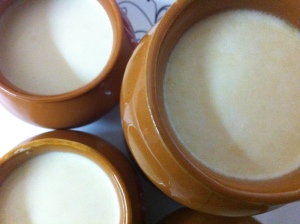 Preparation: Boil the milk with 4 tablespoons of sugar and reduce it to half. Now heat a pan and caremalise 2 tablespoons of sugar. Add the boiling milk to the caremalised sugar and stir till the sugar completely dissolves. Let the milk cool down to room temperature. Now mix in the yoghurt and pour it into an earthen pot and leave it overnight. Once set, refrigerate it for a couple of hours and serve chilled.

LAST WORDS: Do not add yoghurt when the milk is hot, it will curdle. The amount of sugar can be increased or reduced to suit your taste. A little more sugar or less while caremalising it can bring the shade you want to bring to your Mishti Doi. instead of one big earthen pot, you can use or 4-6 small ones.

If you are in North India, winters are synonymous with gajar ka halva. I got to know this fact only after I came to stay in this part of the country 14 years ago. Not that I did not know of this sweet dish made of the healthy carrots but loaded with calories, but the cult status it enjoys in the region was kind of a surprise to me. 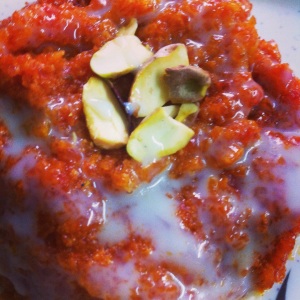 My mother used to put in great efforts to cook this dish. Grating the carrots was a must, because nobody at home liked the taste when it was cooked the easy way, by boiling and mashing the carrots. She would use all sorts of goodies to give it that heavenly taste.
A bowl of hot and tasty ghee-dripping gajar ka halva generously laden with dry fruits is all you need on a freezing cold day. The day I made the dish some days back was incidentally the season’s coldest day in Delhi.
Here goes my recipe of the winter beauty.

Preparations: Grate the carrots and keep it aside. In a pan, heat ghee and fry the carrots till the ghee separates. The ghee will turn orange. Pour the milk and cook the carrots till done. Add sugar, condensed milk, khoya, cardamom and the dry fruits and cook till you get the desired consistency. 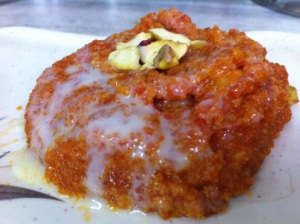 Last words: My secret ingredient in the dish was two teaspoons full of almond-saffron milk powder. And yes, I used a bit of food colour too, though that is absolutely optional.

I am not a big fan of mangoes. And after my pregnancy last year, when mango was a permanent fixture on my fruit palate because it was summer in Delhi for most part of the nine-month gastronomical journey, I just did not want to look at the fruit this year.

But my husband brought home a bag full of Dusehri mangoes recently, and I had to think of ways to ensure they didn’t go waste. I like mangoes when they are freshly cut and served. Mango-flavoured stuff is just not my thing — apart from a few dishes like aamras, mango shake and mango mousse.

Here is the recipe. 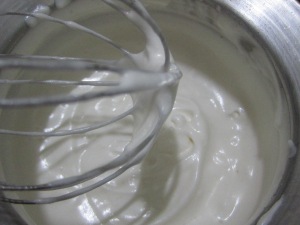 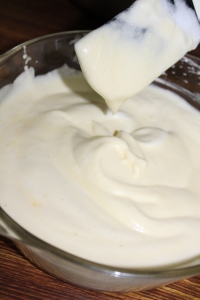 Preparation: Cut mangoes into small pieces and grind them smooth along with 2 tablespoons of sugar. Set aside. Separate the eggs and whisk the whites till they form soft peaks. Add half cup of sugar and beat until stiff peaks are formed. Set aside. Whip the cream with the rest of the sugar and egg yolks till soft peaks are formed. Now gently fold in the mango puree and then the whisked egg whites and pour in short glasses/cups and refrigerate till the mousse is set. Garnish with your choice of crush/whipped cream or mango pieces and serve.

Last words: Be careful while whipping the cream, it should not become grainy.

I had never heard of a dump cake until I saw this recipe in one of the food websites I visited recently. It was incredibly easy to make, and looked so yummy that I just could not wait to have it on my dining table.

But there was a hurdle. I did not have two of the only four ingredients required.

And by the time I managed to go out and get the stuff, I had forgotten an important part of the recipe – the oven temperature required for the dish. To find that, I had to go back to the Internet, but then I did not remember the website either by then. A frantic search on the web took me to http://www.allrecipes.com and I found what I was looking for.

When I finally made it, the dish was worth all the wait and effort. It was crunchy…and yummy…and fruity…and a beauty!! 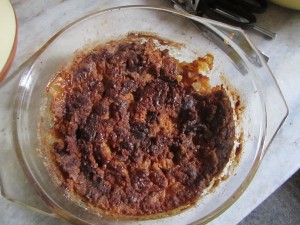 Preparation: Preheat the oven to 190 degrees C. Line pineapple pieces on the bottom of the pan, with half the syrup (if it’s a 500g can). Now cover it with the dry cake mix and press it. Cut butter into small pieces and sprinkle cinnamon powder. Bake for 45 minutes and serve with ice-cream of your choice, though it tastes great without ice-cream too.

Last words: The original recipe had peach instead of pineapple. I personally prefer the taste of pineapple to peaches so used the former, but you can use peach, cherries or any other canned fruit. I really don’t know if this dish can be made with fresh fruit and homemade cake batter. May just try some day and let you know. Please write to me if you do.

I inherited my love for cooking from my grandmother. She was a remarkable lady who was not only an excellent cook but could also fix something on demand at any hour of the day with whatever resources available at home, and without complaining. She would neatly preserve the newspaper supplements and magazines that would have special, but feasible, recipes to be cooked on special days, mostly Sundays. She detested the recipes that were complicated, or required anything that was not likely to be available at home or in the small town we lived in.

In early nineties, when Zee TV came to our home along with the cable connection, and Sanjeev Kapoor launched his cookery show Khana Khazana, he made an ardent fan in Jhumri Telaiya — my grandmom. Despite being a five-star cook, he struck an instant chord because of the simplicity of his recipes. Not necessarily my grandmother tried all the recipes, but did not like to miss any episode. I was her constant companion when she would read, watch, discuss or try out the new recipes. She would have loved to see Food Food, the exclusive food channel launched by the master chef in 2010, the year she passed away. 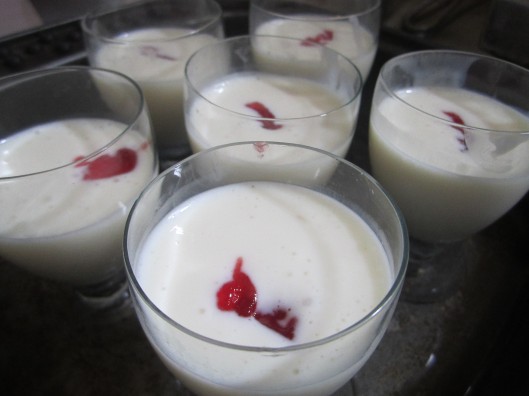 As far as I am concerned, Sanjeev Kapoor wins hands down when it comes to Indian recipes that are simplistic and can be tried by all. My all-time favourite is his besan-bhindi (okra) dish that he shared a few years back, ‘baida roti’ (2002) and a number of snack items. I recently tried a dessert inspired by a dish showed by him on Food Food — inspired because I did not have all the original ingredients at home. For example, instead of vanilla flavoured yoghurt, I used hung curd and butterscotch essence. I did not have red current jam, so used mixed fruit.  Also, I did not want it to be too sweet so used half the condensed milk than advised. I am sure the original recipe (http://sanjeevkapoor.com/baked-vanilla-yogurt-teenpatti-foodfood.aspx) would have tested way better, but wasn’t really disappointed with this one. Try this simple recipe and see it for yourself. 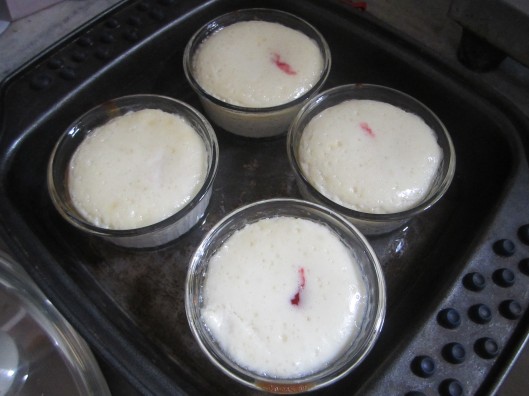 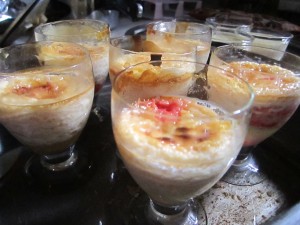 Preparation: Preheat oven to 200 degrees C.  Whisk hung curd and condensed milk with vanilla/butterscotch essence. Fold in fresh cream, mixing properly to give it more creamy texture. Pour into ramekins/short glasses and put a dollop of the jam on top. Place the ramekins on a baking tray one-fourth filled with water. Bake for 15-20 minutes and serve chilled.

Last words: You can use more condensed milk if you want the dish sweeter. It will also make the batter thicker, in which case it the baking time may differ. So, please keep checking. You can also add mango pulp or other real fruits instead of any essence.